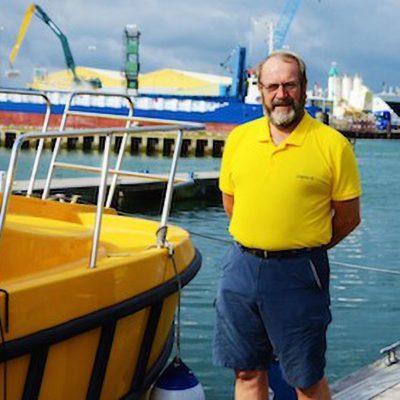 Hugh joined the Merchant Navy as an apprentice in 1972. Worked for Bank line as apprentice and third officer.

Went to college in 1978 to do Mate’s certificate. Was chief officer on Wilie’s line. Obtained Master’s Foreign Going (Class 1) certificate in 1983. Joined the RNLI in 1984 as Assistant Inspector (Training) working his way up through various posts to become Head of Operations (Operational support) before retiring in 2014.

Holds an RYA RYA Yachtmaster offshore and was a Yachtmaster examiner. Represents the RNLI on the boards of the SAR Volunteer Training Fund and still does PR jobs at lifeboat stations.

Joined The Friends of Dolphin in 2015. He enjoys being a skipper and being able to do something special for people who can no longer, or cannot do things for themselves.

Born in Altrincham Cheshire and brought up in Uganda. Educated in Nairobi, and England. Married in 1977 and lived in Cardiff until the RNLI moved him to Poole in 1993. Lived in Parkstone since then.

Please enter your email address to sign-up to our newsletter.