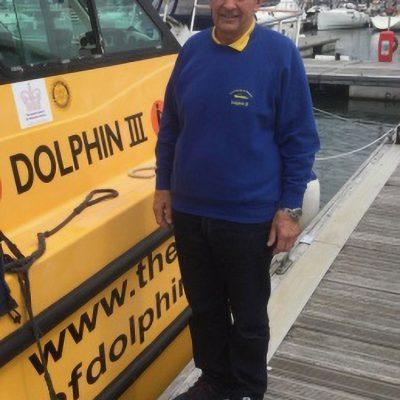 This is my first year as Skipper on Dolphin III; crewed during 2016.

Before moving to Poole two years ago, I was a volunteer Skipper for 8 years on a similar charity boat called Kingfisher, a boat operating on the River Medway & through the locks. The Kingfisher was a purpose built boat offering trips for the disabled and disadvantaged from the Kent area and was sponsored by the local Rotary Clubs. I found this to be a very rewarding experience and was pleased to join the crew of the Dolphin when I moved to the area.

I have owned a boat since the age of 20, and hold Yachtmaster Offshore, Powerboat and PWC Instructor qualifications. I currently have a Fairline Targa 44 GT as our family boat plus a 6-meter RIB, for use around Poole harbour. My Grandfather was the owner / operator of an oyster and shrimping yawl which built in Whitstable and to this day remains an Historic vessel & subject to a preservation order. Two of my uncles sailed in Shamrock, the J Class yacht owned by Sir Thomas Lipton, in an attempt to win the Americas Cup and on Britannia with King George VI, so it should have followed that I took up sailing. Instead I went the power route and ended up water ski racing for a number of years.

I enjoy getting to meet some very interesting and appreciative passengers who, if it were not for the Dolphin would not get to see the stunning sights of Poole Harbour.  There will always be an amusing tale to tell because of the people we carry, but they all have an interesting past and some will burst into song, not always at the most appropriate times, like the other day when I had just called up the Marina for a berth to be allocated, there was no way of hearing the response, but they all enjoyed themselves, which is what is all about.

I am an active member of the Rotary Club of Parkstone, which is the Club that started the Dolphin boat trips in 1980  However, I originate from Kent where I lived on the coast working in the aerospace industry for many year, latterly running my own management consultancy until June 2015, when I semi-retired and relocated to Poole, having owned property in the Poole area since 2000. I was often asked why we didn’t keep our boat on the Kent coast, and I would always say that this area has so much more to offer than the North Kent coastline. Truly, there is no comparison.

Please enter your email address to sign-up to our newsletter.